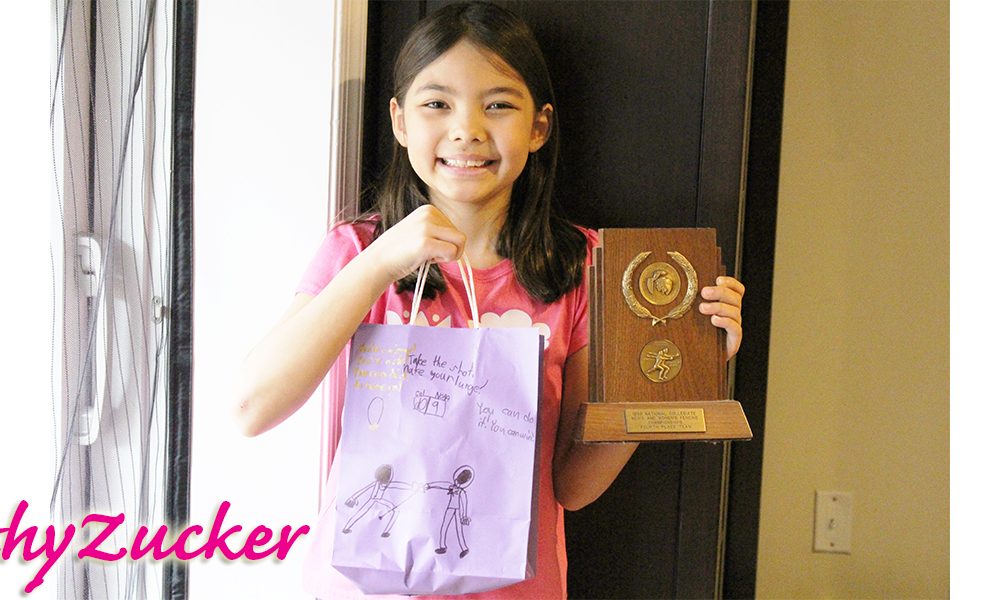 I want to give something to the ‪‎fencers‬, my nine year old ‪daughter‬ says. Let’s see what we have in the ‪gift‬ cupboard, I respond. We pull out colorful goodie bags left over from her ‪baby‬ ‪sister‬’s ‪birthday‬ party. Water bottles. ‪Chocolate‬. We decide to add containers of powdered ‪Gatorade‬ that my ‪husband‬ uses when he competes in ‪fencing‬ tournaments.

Can I ‪draw‬ on the bags? she asks. That is a great idea, sweetie pie! Make sure to put the permanent markers back in the locked bin when you are done so your sister can’t use them to decorate the walls. She covers the bags with ‪NCAA‬ trophies, using her father’s as a model. Inspirational sayings. And then packs them carefully in a giant Ikea bag for me to transport to the venue.

Spring break begins this week. My kids are set to go on a fishing trip with family members. When my husband and I agreed to buy a second car, the intention was that I would use it for girlfriend road trips. One week ago, my college fencing team – the current NCAA champions – qualified a full roster to this year’s championship tournament, which begins in five days. And when I discovered an incredibly low hotel room rate through a list of alumni housing options via the host university? I booked it minutes before the deal ended.

With transportation and housing all set, I reached out to a fencer who has been incredibly kind to my family, and asked if she wanted to accompany me on the trip. Much to my joy, she said yes. After laughingly discussing sleeping on her dorm room floor, we agreed that she would take the train to my home early on the first day of competition, and we would drive down together.

This is why I do what I do – to spend time with amazing people. When I first became an entrepreneur, I attended numerous networking events. And came away feeling empty, much like speed dating. So when I identify the possibility of spending significant chunks of time with a room full of people I would love to know? I jump at the opportunity. 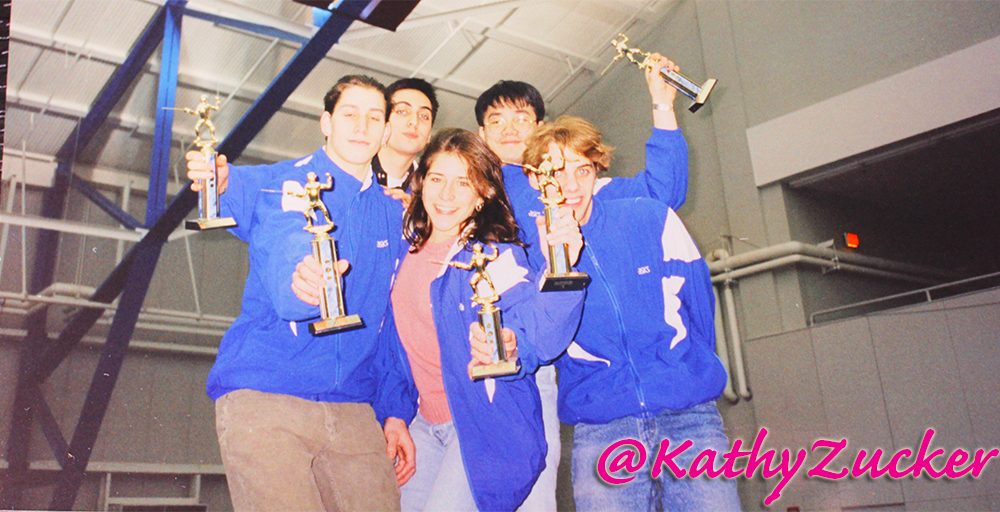 When my boyfriend was twenty years old, I watched him win the qualifying tournament for the ‪college‬ ‪NCAA‬ championships. For the past year – our first as a couple – I had watched him elevate his ‪fencing‬ game again and again. But this? Was the first time I saw him win a major ‪competition‬. And he was not the only one winning. I watched teammates rack up unexpected wins that led to a blaze of blue atop the dais.

Today, my alma mater will be heading back to the qualifiers as they look to defend their title as NCAA ‪champions‬. My ‪husband‬ and I will be watching live as the results come in. I wish the ‪Columbia‬ fencing ‪team‬ and all the competitors ‪joy‬ on the ‪Northeast Regionals‬ battlefield today.

When people ask me what my husband and I do to keep the romance alive, I tell them that we hit each other with swords. Fencing is the glue that binds my family together. Each Saturday, my husband brings one, two or five family members to practice at our local club. On weekdays, he heads into Manhattan to attend evening practice at one of the numerous elite clubs there. Every few weeks, he attends competitions in driving distance of our home.

Now that we own two cars, the possibilities have expanded. One of us can attend a fencing event that begins at dawn, while the other one arrives later with our three young children. This is a setup that my husband and I have talked and dreamed about for years. To be able to compete and involve our family is a gift. And I am grateful for it every day. 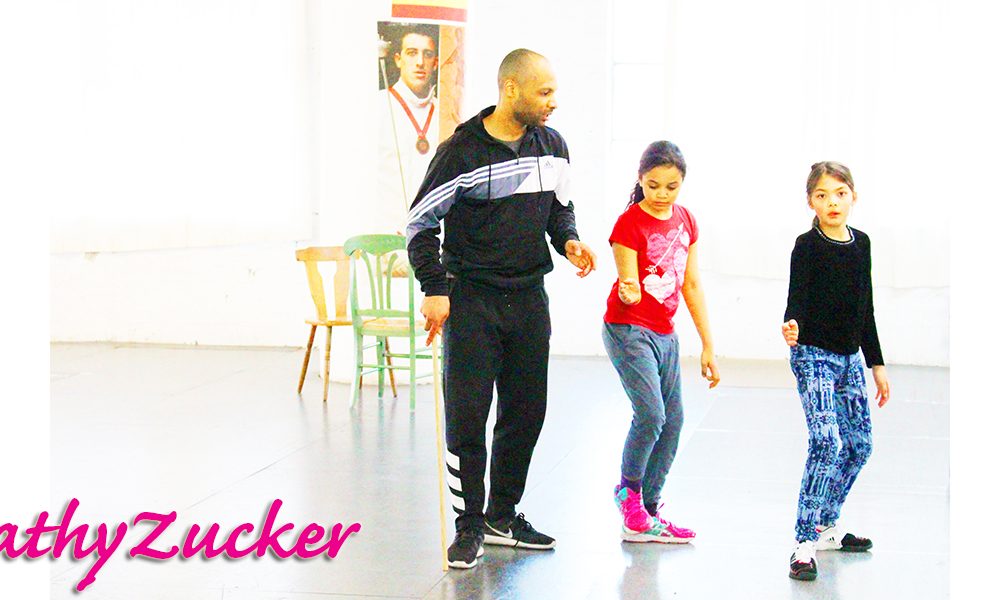 I don’t want to go to ‪fencing‬ ‪practice‬, my nine year old ‪daughter‬ complains. That is your ‪sport‬ and ‪Dad‬’s, not mine. You don’t have to ‪compete‬, I respond. But since you have to come anyway, we might as well bring your ‪equipment‬. And as soon as she arrives at the club and sees her ‪friends‬? She races to change into her gear and join them.

My eldest ‪child‬ has been fencing for the last five years. Her attendance has been sporadic. My ‪‎husband‬ and I do not enter her in tournaments since her coach does not think she is ready. But in the last six months, she has begun attending practice regularly. What has changed? She now has a steady ‪friend‬. The nine year old daughter of one of our oldest fencing friends has begun taking weekday classes. The two ‪girls‬ do footwork side by side. Are paired together in drills since they share similar size and ‪athletic‬ ability. They have met in the past, but seeing each regularly? Is the highlight of my daughter’s week. This is the reason why my ‪family‬ fences – because when the next generation bonds, our ‪community‬ grows.

Six months ago, I was walking into a store when I randomly encountered the mother of my daughter’s friend. She was leaving, I was entering. I reversed course and told the store greeter that I would be back. And then I spent the next hour shopping with my mom friend. Our families see each other from time to time over brunch and birthday parties. As the kids get older, we are getting busier. I missed the baby shower for her second child because I had to work. So this opportunity to spend time together? Was precious and not to be missed.

We tried on jewelry. Talked about the challenges of juggling career with children. And? We talked about our kids. We both have nine year old daughters. Everyone plays tennis in the area where my friends live, so my mom friend was wavering between enrolling her daughter in classes nearby or sending her to fencing practice. And that is when I made her a pledge. Standing on the sidewalk, I told her I would take care of her daughter at fencing like one of my kids. If we are at a tournament, I will help make sure she gets to her strip on time for pools and direct elimination bouts. As a former nationally ranked competitor and board member at multiple national and local fencing organizations, I have a lot of experience running and competing in competitions at all levels. Why am I doing this? To help the child of another fencing family. With both parents working in the corporate world, it is difficult for one of them to be physically present at events. But also? To give my daughter a reason to go to practice.

When The Next Generation Bonds, Your Community Grows

When kids see each other frequently, that is how friendships grow.